When you say “brakes” and “compliance,” stopping distance might come immediately to mind; and possibly brake stroke or pad thickness. But “copper”? Maybe not – yet with the first (A-Level) phase of the Environmental Protection Agency’s (EPA) Copper-Free Brake Initiative coming to a close at the end of 2020, you’ll want to make sure you’re keeping up with the necessary changes to aftermarket air disc brake friction formulation. 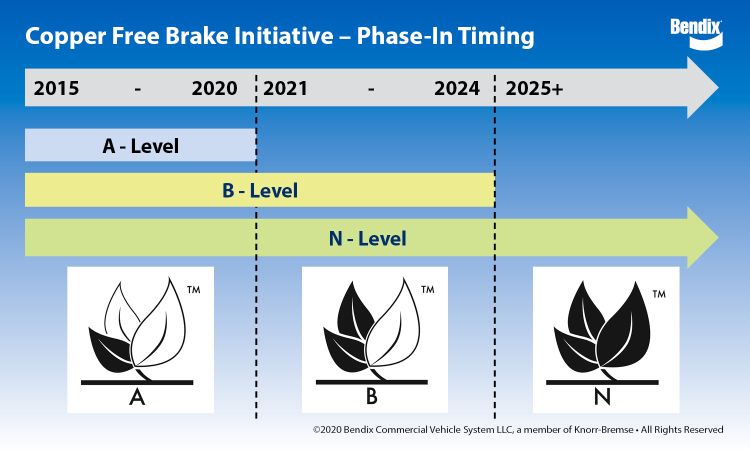 A Look in the Rear-View Mirror (A-Level Phase)

Back in January 2015, the automotive industry – which includes trucking – signed an agreement with states and the EPA to reduce the use of copper and other materials in brake pads. Why? Because the materials from stormwater runoff can be harmful to the environment, affecting plants and animals – and when used in brake pads, it makes its way into the air and water through the fine dust released from friction during braking. (Copper’s not alone in this, incidentally – the agreement also reduces the use of other substances in brake pads, including mercury, lead, asbestos, chromium-six, and cadmium.)

And although those dust particles don’t seem like a big deal, they add up: It’s estimated that in 2010, vehicular braking in California alone released 1.3 million pounds of copper into the environment. In fact, California and Washington state both passed laws in 2010 reducing the amount of copper – a move that Bendix CVS commended for its positive environmental impact. Even back then, most of Bendix’s commercial vehicle brake friction was already compliant with the requirements that wouldn’t take effect for several years.

The EPA agreement outlined phased changes in the composition of brake friction nationwide: Starting Jan. 1, 2015, the legal maximum amount of cadmium in a brake pad formula could be no more than 0.01% (one-hundredth of one percent) by weight. For asbestos, chromium-six, lead, and mercury, the limit was 0.10% - one tenth of one percent (by weight). Copper limits weren’t specified in the first phase, although they were already in place in several states by that point.

Also, part of the agreement are steps to educate the automotive industry on the changes, and guidelines for marking and labeling friction material packaging and products.

Coming Up Next (B-Level Phase)

The next phase of the EPA agreement goes into effect Jan. 1, 2021 and limits the amount of copper to no more than 5% by weight. (The other material limits remain unchanged.) Starting in 2025, copper’s limit drops to 0.5% - one half of one percent – by weight.

Even though many Bendix commercial vehicle friction materials have been compliant with the B-Level requirements for a long time, some older aftermarket pads will be phasing out of compliance at the end of the year. That’s why we’re working to make sure that fleets, distributors, and everyone who changes brake pads is aware of what’s going on with various Bendix replacement pads and labeling. Additionally, air disc brake adoption has increased significantly in the past decade, so there’s a particular interest in ADB pad changes.

The Bendix® BX275™ pad – an OE-level pad – will become obsolete, and the aftermarket pad BA235™ will evolve to BA236™ as of January 1, 2021 because they are out of compliance with Copper-Free Brake Initiative Phase 2. For folks currently using these pads, we’ve been including postcards with the replacement kits letting them know about the change and pointing them to the compliant friction they’ll want soon.

That will be the Bendix BX276 and BX283 pads, which are OE-level pads that have been available (and again – fully B-Level copper-compliant) for several years now. Both will remain compliant through 2024, while also providing longer friction life and meeting FMVSS-121 stopping distance and park hold requirements. 2021 will also see the launch of the Bendix BA236 pad, an aftermarket friction that will also be copper-compliant through phase 2 of the agreement.

Here’s a quick rundown of the parts and replacement kit numbers involved, along with an example of a postcard you might find in a replacement pad kit: 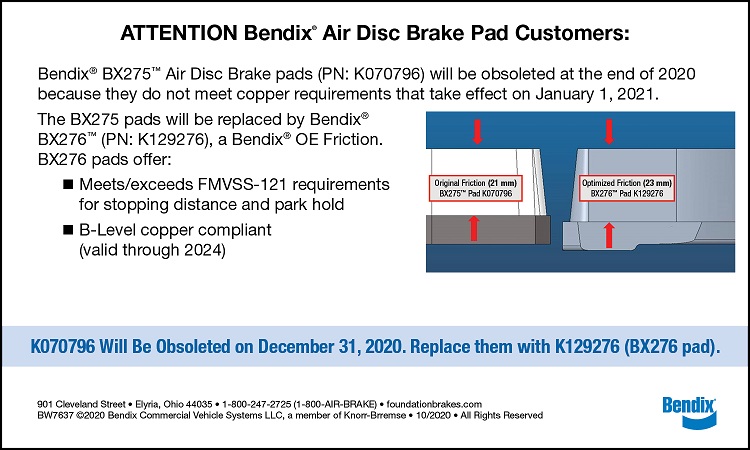 And when phase three of the Copper-Free Brake Initiative rolls around on Jan. 1, 2025, we’ll be ready for that, too: Bendix is already engineering copper compliant ADB friction for the most stringent level, with plans for production well in advance of the deadline.

If you have any questions, don’t hesitate to get in touch with your Bendix representative, or give us a call at 1-800-AIR-BRAKE. Stay safe!

Technical and industry insight from OUR experts.

As air disc brake adoption continues to increase so does the number of fleets and owner-operators searching for cost-effective aftermarket replacement parts that deliver safety, performance and service life.

What to expect from your collision mitigation system (CMS) in the winter (part 2).

Prevent the corrosion that continues the expensive cycle of spring brake replacement.

Back to the Bendix Knowledge Dock